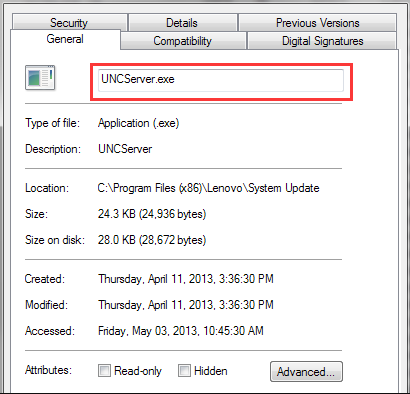 This article will expand upon this executable’s process, whether or not the executable is safe for your computer, and how to resolve CPU and bandwidth overconsumption issues if you believe uncserver.exe to be causing them.

UNCServer.exe is an executable task that relates to Lenovo System Updates and ThinkVantage System Updates, often abbreviated to TVSU. Its function is to open inbound TCP and UDP traffic in order to allow the system update to self-update and download any pending installation packages.

Therefore, if uncserver.exe is running during a system update, then it is simply doing its job. However, some users have encountered a bug that causes uncserver.exe to run constantly on their computer.

To do so, start the program and activate Check Legends which is located under Options. Then, go to View, Select Columns, and then add Verified Signer as one of the columns. If the Verified Signer status of an executable process is listed as Unable to Verify, you should inspect the process further. The file size of uncserver.exe is about 13.4 MB so if the file is larger or smaller than this size then it is likely a virus. Once you have determined the file to be a virus, you can remove the file from your computer using an anti-virus application like Malwarebytes.

How to Fix Issues Caused by UNCServer.exe

At this point, uncserver.exe should be running. However, if the system update has ended and uncserver.exe is still running, then you are dealing with the bug. To resolve this issue there are two troubleshooting methods that you can try.

One of these methods is to simply remove the uncserver.exe process from your computer, which is not recommended. However, if the process is causing your computer problems and you have exhausted all other options, then it might be your best course of action. Roughly three percent of people have removed this file on their Lenovo computers so it might not have any significant harmful effect on your computer, but it is best to be absolutely sure before removing the executable.

At this point, it should be clear what uncserver.exe does for your computer, whether or not it is a virus, and how to resolve the bug that causes uncserver.exe to constantly run on your computer. If you follow the troubleshooting methods listed in the section above, your CPU and bandwidth overconsumption issues will be resolved in no time.